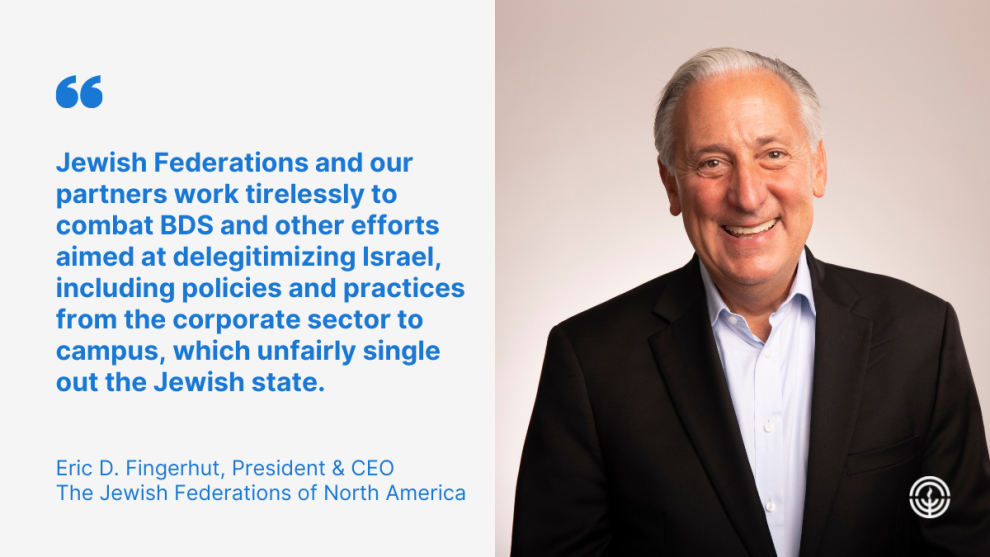 Jewish Federations of North America and our partners, including the Jewish United Fund (Chicago's Federation) and JLens, are proud that their active engagement in the anti-BDS fight has led to a victory in the case of financial services company Morningstar.

Morningstar acknowledged that it had unfairly rated Israel under the guise of ESG (Environmental, Social, and Governance) analysis, and agreed to adopt policies that would weed out anti-Israel bias from its system.

The company took the steps following an independent investigation it had requested by outside law firm White & Case under pressure from the Illinois pension board, which was investigating it for potentially breaching anti-BDS laws. The investigation found that some of its practices unfairly affected its ratings of Israel, and provided several recommendations on how to fix it, which Morningstar adopted.

Federations and their partners were key players in advancing the issue, and will continue to analyze and monitor the results of the White & Case report in an effort to address anti-Israel bias in the sector.

"Jewish Federations and our partners work tirelessly to combat BDS and other efforts aimed at delegitimizing Israel, including policies and practices from the corporate sector to campus, which unfairly single out the Jewish state," said Jewish Federations of North America President and CEO Eric Fingerhut. "We are proud of the communal efforts that have led to the independent investigation and thorough report by White & Case, the clear acknowledgment by Morningstar that its practices unfairly rated Israel, and the reforms it has committed to adopt to ensure companies doing business in Israel are not unfairly rated by faulty ESG screens. In particular, we applaud JUF's focused and effective engagement on this issue."

JUF Executive Vice President Jay Tcath added: "White & Case’s report, which was commissioned and adopted by Morningstar, is an important start, but the next critical step is the company’s faithful implementation of the report’s recommendations and policy changes. We look forward to continuing our work with the business community, policy makers and communal institutions to expand best practices in the ESG field when it comes to the treatment of Israel."

JLens CEO Julie Hammerman said: "This is a victory in the fight against the anti-Israel BDS campaign. Morningstar's commitment to implement the many recommendations in their report will eliminate a key source of BDS support in the economic arena."

You can find the full independent report and read Morningstar's statement on it here.