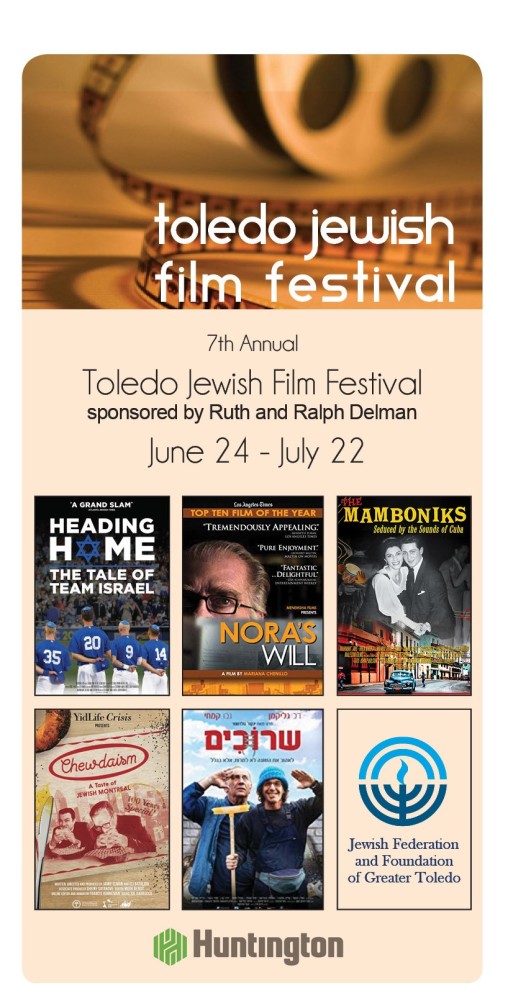 All movies will be shown at Lourdes University Franciscan Theatre (6832 Convent Blvd.) in Sylvania at 7 p.m. Free parking.

General admission - $9 per film, per person

All pre-purchased tickets and passes will be available the day of each film. Popcorn and water is included.

Festivalgoers are encouraged to arrive at least 15 minutes prior (unless noted) to the film program. All screenings are general seating. Seats are occupied on a first-come, first-served basis. All cell phones and other electronic devices inside the auditorium must be turned OFF prior to the introduction of the film. Please do not text or otherwise check devices during screenings. The lighted screens on electronic devices are distracting to others. The use of cameras or recording devices of any kind is strictly prohibited during the screenings.

A stirring story of sports, patriotism, and personal growth, Heading Home charts the underdog journey of Israel's national baseball team competing for the first time in the World Baseball Classic. After years of defeat, Team Israel is finally ranked among the world's best in 2017, eligible to compete in the prestigious international tournament. Their line-up included several Jewish American Major League players―Ike Davis, Josh Zeid and ex-Braves catcher Ryan Lavarnway―most with a tenuous relationship to Judaism, let alone having ever set foot in Israel. Their odyssey takes them from Tel Aviv and Jerusalem, where they are greeted as heroes, to Seoul, where they must debunk their has-been, wannabe reputations. With their Mensch on the Bench mascot by their side, the team laughs, cries, and does much soul-searching, discovering the pride of representing Israel on the world stage.

When his ex-wife Nora dies right before Passover, José (Fernando Luján) is forced to stay with her body until she can be properly put to rest. He soon realizes he is part of Nora's plan to bring her family back together for one last Passover feast, leading José to reexamine their relationship and rediscover their undying love for each other. Nora's Will is a comedy like nothing you've seen before, a truly unique tale of lost faith and eternal love from one of Mexico’s most talented new filmmakers, writer/director Mariana Chenillo. Nora's Will was named Mexico’s Best Picture of the Year, taking home seven Ariel Awards. Chenillo is the first female director ever to win Mexico’s Best Picture award.

Bagels meet bongos in The Mamboniks, a 90-minute documentary film that tells the little-known story of the Jewish love affair with Latin music. Set in Havana, Miami Beach, New York, and the Catskill Mountains, this fun, uplifting film features a lovable, somewhat zany collection of dancers from the 1950s. Now retired yet still dancing in Florida, they share their passion for the mambo, the hot dance from Cuba that became a world-wide sensation. With an infectious soundtrack including Tito Puente, Celia Cruz, and mambo king Pérez Prado, this film explores a mostly unexamined aspect of Jewish life and culture.

Chewdaism – A Taste of Jewish Montreal

With special guests Eli Batalion and Jamie Elman, creators and co-stars of Chewdaism and YidLife Crisis

English and Yiddish with subtitles

Canadian funnymen and best friends return to their hometown to explore their heritage by eating their way across the city in the nosh-umentary Chewdaism: A Taste of Jewish Montreal. Comedy duo Eli Batalion and Jamie Elman are creators and co-stars of YidLife Crisis, a successful Yiddish language web series exploring, with charm and jocular snark, the burning questions and absurdities of contemporary Jewish life. They traveled the world with their show, documenting Jewish food cultures from New York to London to Tel Aviv. Now nearing middle age and their own proverbial YidLife Crisis, they're back in Montreal to delve into 100 years of the city's rich Jewish history, and to stuff themselves with―and kvell over―its even richer Jewish food.

From bagels for breakfast, deli-smoked meats at lunch, and a Hassidic bakery's chocolate babka snack, to a raucous Sephardi dinner and taste of the new Jewish fusion cuisine at an innovative Montreal restaurant, Jamie and Eli sample it all. Over 24 hours, they seek out the best Jewish eateries Montreal offers, unlocking its intriguing past and marveling at its vibrant present and future. This is a gastronomic adventure to be savored, a warm-hearted, affectionate tour of Montreal with a pair of hilarious and hungry guides with a bottomless appetite for great food and witty conversation.

Shoelaces tells the story of a complicated relationship between an aging father and his special-needs son, whom he abandoned while he was still a young boy. Reuben's kidneys are failing and his son, Gadi, wants to donate one of his own to help save his father's life. However, the transplant committee objects to the procedure, claiming that Rueben, acting as Gadi's sole legal guardian, does not have the right to authorize such an invasive procedure. Gadi, who recently lost his mother, is afraid of losing his father, too. He feels he finally has the chance to do something meaningful; to become a man and stand on his own. He's furious with the committee's decision and sets out to fight for his right to save his father's life. Through the film's portrayal of a relationship full of love, rejection, and co-dependency, it manages to shed some light and question the importance of human life, human connection, and if life is even possible without either one of them.