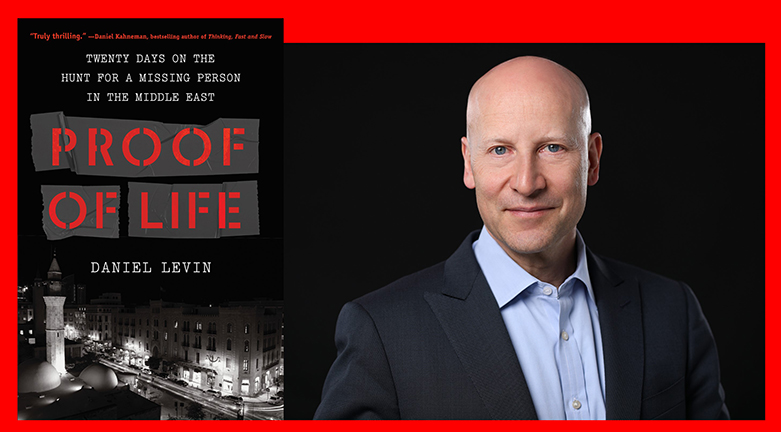 Book Fest In Your Living Room Presents Daniel Levin, Proof of Life: Twenty Days on the Hunt for a Missing Person in the Middle East
Zoom Author Talk and Q & A

Daniel Levin was at his office in New York when he got a call from an acquaintance with an urgent, cryptic request to meet in Paris. A young man had gone missing in Syria. No government, embassy, or intelligence agency would help. Could he? Would he? This begins the suspenseful, shocking, and at times brutal true-life story, PROOF OF LIFE: Twenty Days on the Hunt for a Missing Person in the Middle East (Publication Date: May 18, 2021; $26.95), that finds Levin, a lawyer turned armed-conflict negotiator, navigating the seedy and dangerous underbelly of the Middle East, where he encounters powerful sheiks, drug lords, and sex traffickers in pursuit of the truth.

Over the course of twenty intense days, Levin barters and negotiates his way through Istanbul, Beirut, Amman, and Dubai on a quest to find a young man who disappeared under suspicious circumstances. This dangerous journey brings him into contact with the shadowy world of the underground war economy where everything is for sale, and he sees first-hand the power of the industries that endlessly fuel these conflicts—the trade of cash, goods, weapons, drugs and most devastatingly, people. PROOF OF LIFE is a mind-blowing exploration of how people use leverage to get what they want, entangling Levin in a dizzying web of favors and counter favors with the highest stakes possible.

Levin also humanizes the citizens who live in the shadows of conflict, painting a heart-rending truth of the reality of forever wars, some of which he experienced firsthand in combat during his own military service.

PROOF OF LIFE is a fast-paced thriller wrapped in a memoir, a must-read for anyone interested in power dynamics, international affairs, or the Middle East."

The son of a diplomat, Daniel Levin spent his early years in the Middle East and in Africa and then trained as a lawyer. Currently a board member of the Liechtenstein Foundation for State Governance, he has, for the past twenty years, worked with governments and development institutions worldwide, focusing on economic development and political reform through financial literacy, political inclusion, and constitutional initiatives. He is also engaged in track 3 diplomacy and mediation efforts in war zones. Levin’s first book, Nothing but a Circus: Misadventures among the Powerful, was published in Germany, Japan, Russia, and the UK. Proof of Life is his first book to be published in the United States. He lives outside New York City.