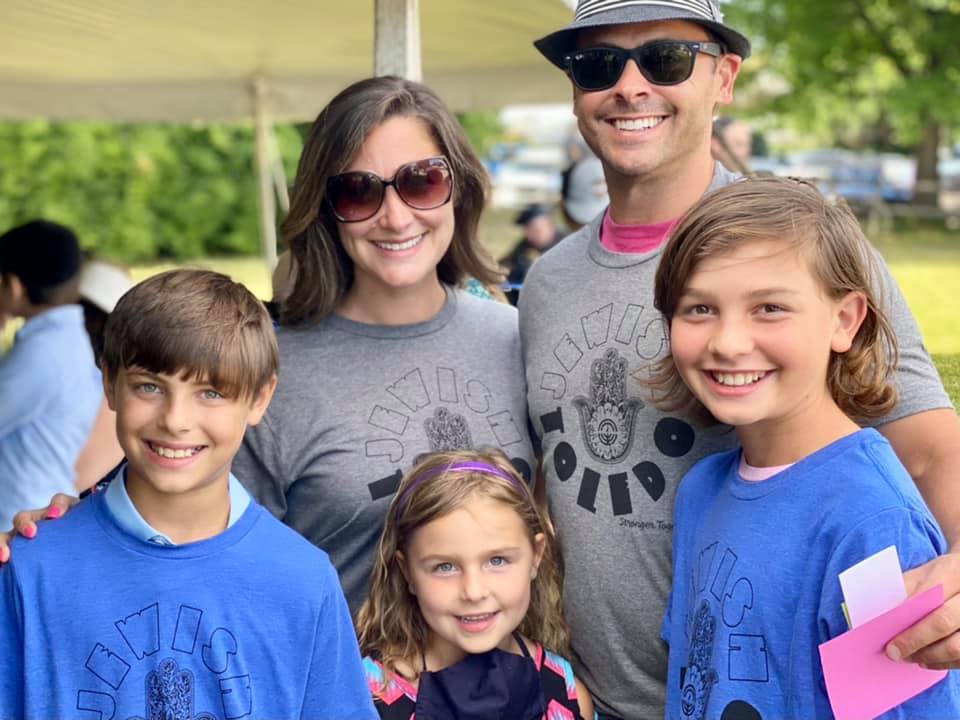 Jeff Green, originally from East Lansing, Michigan, was living in Ann Arbor. Tamara White, with roots in Pittsburgh, was living in Maumee. The ancient concept of fate, coupled with the newer construct of JDate, brought them together. After two years of dating, the two got married and decided to make Toledo their home, while Tamara began her career in physical therapy and Jeff finished graduate school. Though they had each other, they had no other family or friends in their new hometown.

One month after moving here, the Greens were invited to a Jewish Federation of Greater Toledo wine tasting event, which started their journey into becoming involved with Federation's Next Jewish Generation division, including a transformative summit in Washington, D.C., where they lobbied for Jewish causes. These experiences further grew into committee involvements and Tamara's current Federation Board position. "Thanks to that one event 16 years ago, we met our network of closest friends here in Toledo today," said Jeff.

Soon after that, the Greens went to another Federation event for all ages where Jeff met then-Federation CEO Joel Beren, who talked with Jeff about his background and introduced him to other community members, which led him to a new career. "Honestly, I owe the genesis of my career development to the Jewish Federation," said Jeff, now an executive with Allshred Services, a regional information destruction company.

Today, the Greens have three children: Gabriel, 11, Avi, 9, and Maya, 6. They joined a synagogue (Shomer Emunim) soon after Gabriel was born. All of their children attended the Federation's Gan Yeladim preschool. "The kids call their preschool friends their family," said Tamara. "And this Jewish community has become our family."

The Greens, in addition to being deeply committed to Judaism, which they point to as the foundation of their relationship, are avid believers in philanthropy. They talk with their children at home about giving back, and are always looking to share different ways to be charitable. "Even for the kids' birthday parties, instead of their getting gifts, we collect gifts to donate," said Tamara. “Our kids will then take their gifts to organizations who help children who are less fortunate.”

So it's not surprising that when Arleen R. Levine, J. D., Director of the Toledo Jewish Community Foundation, began talking with the Greens about making a planned gift, their interest was piqued. "It really fit what we’ve been wanting to accomplish," said Jeff. "We are always looking for additional ways to give to the Jewish community, and the Toledo community at large, and we thought it was a way we could formalize our philanthropy while leaving a lasting legacy."

The Greens chose to establish a Donor Advised Fund, which enables them to regularly recommend grants to their favorite qualifying charitable organizations, including local Jewish causes; BeInstrumental, a nonprofit music organization for children that they began 10 years ago; and charities that support research for medical conditions affecting family members. "Prior to establishing the fund, we were writing checks for $50 here, $100 there," said Jeff. "The Donor Advised Fund lets us plan perhaps larger gifts for the future – and as a family. We also love that now we can watch our donor dollars grow, while helping the Jewish community."

“Our community is fortunate that Jeff and Tamara chose to make Toledo their home," said Arleen. "They are passionate about a broad array of meaningful programs and services in the Jewish community, the arts and the medical arena. Natural leaders, they are inquisitive and thoughtful in evaluating needs and offering perspectives and potential solutions. I am confident that their Donor Advised Fund will provide many meaningful opportunities for their family’s charitable giving, and I am honored that they have chosen the Foundation to serve as their partner.”

Donors can establish their fund through a gift of cash, check or any kind of property, including appreciated securities, closely held stock, insurance and real estate; the fund's assets are managed by the Foundation.* Additionally, donors generally receive an income tax deduction for the cash or the full fair market value of the assets contributed to the Donor Advised Fund; if the property contributed to the fund is appreciated securities, real estate or some other capital asset, donors may be able to avoid paying a capital gains tax on the appreciation.

The Foundation Board recently approved lowering the minimum gift to establish a Donor Advised Fund to $2,000, a significant reduction from the previous minimum of $5,000, in order to create new opportunities for more Toledo community members to participate in legacy giving.

"Arleen and the Foundation made it easy to get [our Donor Advised Fund] started," said Jeff, noting the newly lowered threshold for opening a Donor Advised Fund. "I would invite any peers interested in leaving a legacy to speak with us about getting started because, collectively, we really can make an impact on Jewish Toledo."

For additional information on the Foundation or establishing a Donor Advised Fund, contact Arleen R. Levine at 419-724-0355 or Arleen@ jewishtoledo.org.

*Donors should consult their professional advisors for legal or accounting advice.