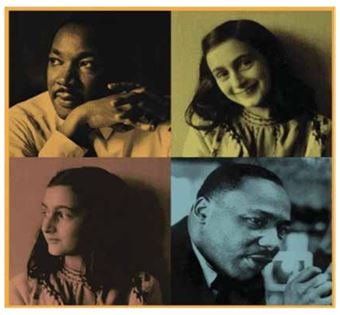 On Thursday, January 19, 2023, 6:30 p.m., at The Center Theatre in the Center for Performing Arts at The University of Toledo, 1910 W. Rocket Dr., Toledo, Ohio, The University of Toledo will commemorate International Holocaust Remembrance Day and Martin Luther King Day with a dramatic presentation: Letters from Anne and Martin from the Anne Frank Center for Mutual Respect. The program is free and open to the public.

The International Holocaust Remembrance Day, observed on January 27, 2023, is an internationally recognized Memorial Day for the victims of the Holocaust. The Holocaust is the genocide that resulted in the annihilation of six million European Jews as well as millions of others by the Nazi regime and its collaborators. The day was designated by a United Nations General Assembly Resolution on November 1, 2005. Martin Luther King Day is observed on January 16, 2023, to mark the birthday of Martin Luther King Jr. in recognition of his nonviolent activism in the Civil Rights Movement.

The traveling production of Letters from Anne and Martin counterpoints the experiences of two legendary figures: Martin Luther King Jr. and Anne Frank. Through the inspirational words of her hopes and plans for a peaceful and unified world, Anne Frank’s The Diary of a Young Girl serves as a reminder of the atrocities experienced during the Holocaust because of bigotry. Written in response to his arrest during a peaceful demonstration, the defense of his strategy of nonviolent resistance to racism in Martin Luther King’s Letter from Birmingham Jail, is one of the most important written documents of the civil rights era. To this day, Anne’s and Martin’s words still resonate as a testament to how one voice can carry the voices of millions that have been silenced.

This unique adaptation combining their iconic words illustrates how both Martin Luther King and Anne Frank, born during the same year and living on continents 5,000 miles apart, suffered from bigotry, but shared parallel aspirations for humanity. Despite being faced with unfair persecution, he in the Jim Crow South, and she in Nazi-occupied Holland, the African American Civil Rights Movement leader and the Jewish Holocaust victim believed in fairness and justice for all and in the underlying goodness of people.

This live dramatic performance features professional actors who bring to life the courage and eloquence of Anne’s and Martin’s thoughts and promotes constructive ideas on how to confront intolerance and discrimination today via a talk back at the end.

This program is co-sponsored by the Jewish Federation of Greater Toledo’s Ruth Fajerman Markowicz Holocaust Resource Center and The University of Toledo Office of Diversity, Equality and Inclusion and College of Arts and Letters.

Parking for the program is free in lots 12 and 12S.