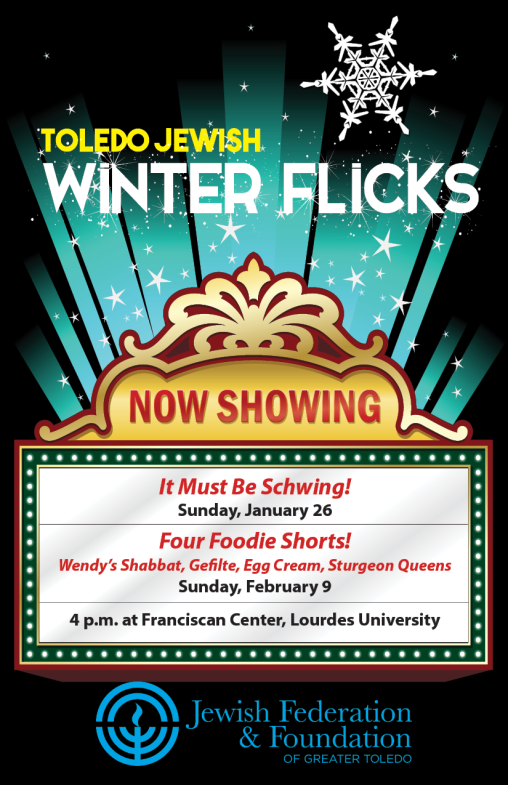 All movies will be shown at Lourdes University Franciscan Theatre (6832 Convent Blvd.) in Sylvania at 4 p.m. Free parking.

General admission - $8 per film, per person

All pre-purchased tickets and passes will be available the day of each film. Popcorn and water is included.

To purchase tickets, contact Hallie at 419-724-0362 or hallie@jewishtoledo.org. Tickets will also be available at the door on a first come, first served basis (seating is limited).

It Must Be Schwing

English and German with subtitles

At a time when Afro-American musicians in the USA were discriminated against and ostracized, Blue Note records respected them as artists and equals. Not only did the label value their talents, it also gave them a much-needed platform, It Must Be Schwing tells the moving story of two friends united by a passionate love for jazz and of their profound belief in equality and freedom for every single human being.

The short documentary film is about a group of Jewish senior citizens who celebrate Shabbat at their local Wendy’s fast food restaurant with Hebrew blessings along with burgers and fries.

Each year, the Hermelin family of Detroit come together to celebrate Passover by eating Gefilte fish, the meal that stars in New York-born director Rachel Fleit’s new film. While simple on the surface, Gefilte is stuffed with history and meaning (just like the recipe itself, which includes a paste of fish, salt, vegetables and egg). However, “Gefilte isn’t about the fish,” suggests the Brooklyn-based writer and director. Instead, “it becomes a lightning rod in which we project all of our feelings about family, identity, tradition, struggle, loss—and as always, love.”

Egg cream is a short film about the enduring meaning of a beloved chocolate soda drink born in New York City’s Jewish Lower East Side. The egg cream contained neither eggs nor cream – it was a product of necessity and hardship, but a source of joy and sweetness. Through a tour of egg cream establishments led by a filmmaker and his young daughter, exhaustively researched archival imagery, and even a song by Lou Reed, the film examines the Jewish experience in America and the mythology of a simpler time.

Four generations of a Jewish immigrant family create Russ and Daughters, a Lower East Side New York City lox and herring emporium that survives and thrives. Produced to coincide with the 100th anniversary of the store, this documentary features an extensive interview with two of the original daughters for whom the store was named, now 100 and 92 years old, and interviews with prominent store enthusiasts including Supreme Court Justice Ruth Bader Ginsburg, actress Maggie Gyllenhaal, chef Mario Batali, New Yorker writer Calvin Trillin, and 60 Minutes correspondent Morley Safer. Instead of using a conventional narrator, the filmmakers bring together six colorful longtime fans of the store in their 80s and 90s who sit around a table of fish reading the script in the style of a Passover Seder.